Home
Author
Shop
Gallery
Press
Friends
Contact
Powered by PayPal
Shopping Cart
Home
Author
Shop
Gallery
Press
Friends
Contact
The Crimson Fantasies
If you enjoy reading the urban paranormal genre, brace yourself before you slake your thirst for the unpredictable. Part blood bath and part bubble bath, my Crimson fantasies are rife with humour and horror, suspense and steamy bits. An attic of secrets and a forbidden house, a kidnapping and a pub crawl, not one but two prison escapes, all have one thing in common — a 927-year-old biter with a taste for the nubile.

The past, present and future now await you... 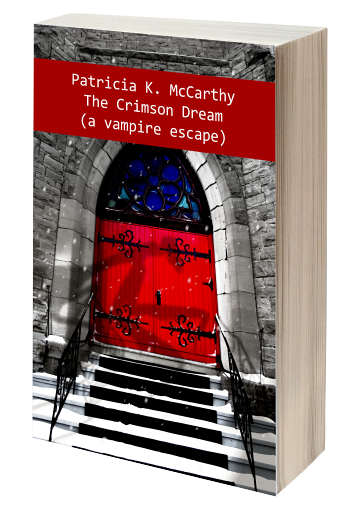 More Details - Buy Paperback - Buy eBook
The following is an excerpt from page 118 of The Crimson Dream:
In that small passage of time, when she bit into chocolate and opened her mouth to describe to Sir William the joyous sensations within her, he leaned in and kissed her. He pressed himself hard against her, forcing the compression of his body to hers, not allowing her to pull back, and pushing her to the wall. His hand brushed across and rubbed one nipple ever so slightly. Into her mouth went his tongue to taste hers, covered in chocolate, sweet with flavour. He felt the intensity of her emotions overcome her; she did not resist his passion. Her body moved into his and opened as a pear would split to a sharp blade. And when her breath stopped short and he sensed she was near to passing out, he scooped up her light frame and brought her to the bed. Every part of his vampire body came alive; his hunger smouldered for her blood, for the taste of her lips, her skin, her armpits, her thighs, to explore and taste every sublime crevice wholly with mouth, eyes and hands. His senses would become one with her body.

Sir William withdrew to throw off his jacket. He stepped out of his trousers and tossed them to the floor. Next came his dress shirt followed by his under garment. His naked body, aroused and ready, remained above Catherine, letting her eyes prey on him, to see and believe that what was happening was actually happening. The man who would seduce her with his mere presence would change her life forever, as only a master could with a weapon of power.

Catherine lay before him with chocolate on her lips, her gaze focused on him. She wanted what every young lady wanted but was raised to refuse until marriage. She would take him into her deeply and completely, until all logical sense would cease to exist. She wanted nothing more than to be devoured by him, from toe to head, from lips to breast, from bum to...

More Details - Buy Paperback - Buy eBook
The following is an excerpt from page 4 of Mounting the Bedpost:
He didn't have to touch her

to know her thighs were as smooth

as the hour long.

He didn't have to feel her skin,

to know his grasp would slip

to stroke her hair once,

its length longer than his fingers

wanting the nape of her neck,

More Details - Buy Paperback - Buy eBook
The following is an excerpt from page 30 of Friction:
I reveal to you

my nature and secrets

when you listen quietly

I tell you what I mean

when the blood is pumped into my veins.

I pursue your heart

and fall toward the day.

When last it arrives,

is the morning grass.

Where else will logic lead you to,

in my haunted cave, wet?

Will you paint your likeness

More Details - Buy Paperback - Buy eBook
The following is an excerpt from page 17 of Vulgar Verse:
I stand knee-deep in water

so cold, and fall even lower

than imaginable, below the ground

where dreams are no longer believable.

I only want his body to take me home,

to show me the way, to needing,

to knowing that I want no other man,

to come inside me.

I tell him everything,

when the cock strikes havoc

More Details - Buy Paperback - Buy eBook
The following is an excerpt from page 132 of The Crimson Woman:
The quiet breathing, the subtle looks, the continuance of body, the fluidity of lithe limbs and the propulsion of unrequited love; all were physiological qualities playing out in him, for he thrived as the ultimate for centuries without equal challenge, until he encountered a free-thinking woman. And every woman wanted him, in the very old past before women were permitted a voice, long after women won emancipation, and well before women knew better of him. All women wanted to be devoured and made whole by him.

He was unprepared for her ambivalence, for the unbreakable love she held for her husband that fortified her iron will. He truly believed she would die before betraying their love and because of it, he wanted her all the more. To bed her for one night, before hurling himself into the deep well of eternity, before transferring the burden of knowledge and responsibility, he wanted her to want him, to become a possession of his reality of time and future.

Sir William removed two nectarines from the bottom crisper in the refrigerator and cut the fruit into halves, coring the centre pit and placing the fleshy treats onto a small plate. He then poured a glass of fresh water into a beer pint glass. He smelled the soft, fragrant aroma as he handed the food and drink to Magdalene.

"Kindly follow me into the dining room," my dear. The crispness of the day's light, exploding through the kitchen window, cast long shadows of Sir William's profile against the beige walls.

More Details - Buy Paperback - Buy eBook
The following is an excerpt from page 102 of The Crimson Boy:
"Of course," said Sir William with confidence. His nostrils flared and her fragrant scent curled in his nose. He inhaled quietly, filling his nasal passages deeply, while simultaneously bringing to mind an image of her on the rack as Samuel was above, turning the crank.

Sir William, on rare occasions, however extreme, would respond to the female species with arousal. He was surprised; sitting across the table from Magdalene incited in him a desire for wanting a woman the old-fashioned way, through intercourse.

He smelled again, breathing in far longer, allowing the scent to remain inside his nostrils, holding it with his mind, recognizing her scent, attaching it to her as though it were a silk cover clinging to her limbs. He couldn't stop looking at her. The lingering aroma of marijuana was picked up; caught in the material of her clothes.

"You are a cultivator of organic plants, are you not?" he asked.

"Yeah," she answered. "Organic is ideal. Food tastes better, especially meat like chicken if they're raised free range without antibiotics and fed on grains instead of animal parts," Magdalene looked around, horrified she was about to say that word in public, to use the very word which had been resting on the tip of her tongue from the moment Sir William's face became known to her.

"Are you a..." she tried once more to ask. Again, the word would not come out.

"A super-charged, reanimated human," he said, finishing her sentence.

Magdalene looked around to ensure no one was within proximity.

More Details - Buy Paperback - Buy eBook
The following is an excerpt from page 224 of The Crimson Crimes:
Samuel Crimson, a most sought-after hybrid vampire, looks down at the empty chair. The four guards stand, one at each corner, with hands resting on gun butts, the leather snaps of their holsters open to allow quick access to their weapons. The female steps in to cut off Samuel's handcuffs then backs away. The fresh bruises on Samuel's face tingle with pain. He feels his swollen lips every time he swallows or speaks, and his eyes hurt every time he blinks. He pulls out the chair with his foot and gingerly sits, the tenderness in his groin and legs acute.

"Is it not illegal to take blood from someone who hasn't officially been arrested? What am I being held for?"

"Please extend one finger and then choose which arm you would like me to use," demands the professional, reaching across the table with a lancet to stick his finger. A length of tubing is laid out on the table, to tie around his upper arm.

"Did you hear my question?" asks Samuel. He thinks he sounds funny speaking with swollen lips. He reaches one hand across the table and his finger is pricked. The smear of blood is rubbed onto a small glass slide, which in turn, is inserted into the meter to test his hemoglobin level. The reading is normal.

The female guard says, "Good. We don't want the big guy to faint on us, do we?"

This elicits a chuckle from the other guards. The professionals do not react.

More Details - Buy Paperback - Buy eBook
The following is an excerpt from page 3 of The Crimson Time:
Magdalene Crimson melted in sweet ecstasy. The pain hardened her nipples into rubies. Her legs were an eager, open mouth, spread far apart on the fine-oak stretching table. She gripped the clamps intensely. The worse the crack of the cane stung, the stronger grew her desire.

Samuel possessed her, changing the pitch and rhythm of her quivering flesh with rapid cracks. When he struck fiercely, the electric impulse of contact made Magdalene feel alive. Each crack felt like a hot wasp sting, reverberating and pulsating for seconds afterward.

Samuel instructed Magdalene in the arts and magic of hard play, exploring new dimensions of pain in their sanctuary, a place where boundaries were pushed in privacy.

The attic's slanted walls of brick and wood exhaled the sweat and flesh of her scent.

Her subtle and unusual aroma of fresh cut grass, her reddened flesh and writhing limbs seduced Samuel wholly. He marveled at the awesome strength of her body. Sir William Simon Hennessy, Magdalene's predecessor, had transformed her into an extraordinary female, the one and true vampire on Earth.

More Details - Buy Paperback - Buy eBook
The following is an excerpt from page 109 of The Crimson Man:
Magdalene felt him between her legs, crossing them, trying to take her mind off the fact that her panties were soaking wet. This man seated beside her was almost too much, too much for her fantastic imagination. If only he knew what dirty deeds she had conjured up while he spoke.

He wore relaxed fitting pants and a black, crew neck shirt, with white buttons; the first two undone, opening up to his chest; black hairs speckled lightly across. His sandals were well worn and his toenails groomed.

She thought how funny it is that women notice the most unusual aspects of a man.

"I realize it's impolite to ask personal questions about someone I've only just met but they really are the best questions to ask after all," he remarked.

"You're not involved with anyone?"

He liked her light-hearted humour.